From Normandy to the Île de Ré


Arriving at Dieppe just after lunchtime, we took the main road west along the coast the short distance to Veules les Roses, and after a near miss at our first French mini roundabout (oops!), found the narrow lane up to the clifftop parking area to the west of the town, where there were several motorhomes parked on the large grassy area. It was a short walk down the cliff path to the attractive seafront of this small resort with typical flintstone houses.

The next morning we continued along the coast to the busy harbour of Fécamp, then reached Étretat. Access to the free aire by the old railway station was closed due to roadworks, so we drove to the popular paying aire beside the municipal campsite, about one kilometre inland from the seafront with its magnificent arched cliffs. 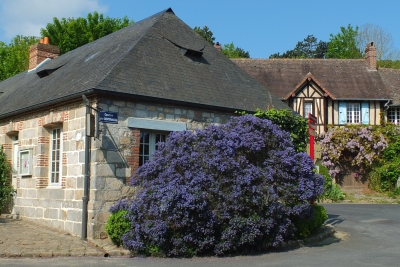 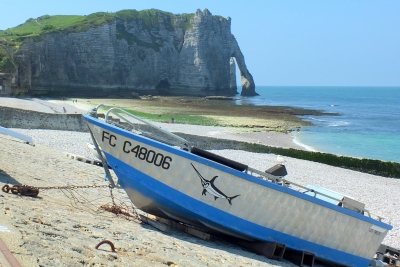 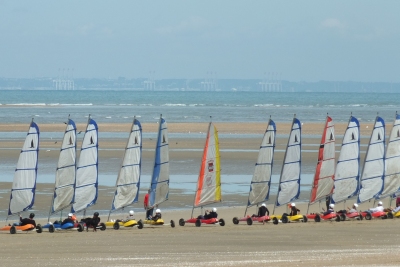 The next morning the weather had turned for the worst so we headed across country to the Pont de Tancarville toll bridge across the Seine, and along the estuary to reach Honfleur, where there was plenty of room at the large aire near the harbour. We strolled past several river cruise boats to the busy town centre. Down a narrow street we found the Erik Satie museum, where we caught the end of a free concert of a few of his less well known piano pieces and songs. We decided to miss the guided museum tour (in French). As we left the heavens opened so we got drenched walking back to the van.

Continuing west along the Calvados coast, we drove through the resorts of Trouville and Deauville, where motorhomes don't seem to be welcome with height barriers everywhere, and stopped at Dives s Mer where there was a small aire next to the modern marina. After a stroll along the massive sandy beach, watching a group of youngsters getting ready for some sand yachting, we set off inland, and realised that there were fuel shortages due to industrial action, judging by the queues and closed filling stations. Luckily we had an almost full tank, enough to last us a few days at our leisurely pace. We continued on minor roads to reach the pretty Plus Beau village of Beuvron en Auge, with its typical Normandy style timber-framed houses and flowery market square. There was a good tourist office where we discussed Brexit (a week before the referendum!) with the friendly staff. We continued to Falaise the next day, where we managed to get some diesel before heading to the municipal campsite, set below the impressive château where William the Conqueror was born. The next morning we visited the busy town market and the Museum of Automata with its mechanised tableaux, as seen in department store windows years ago. 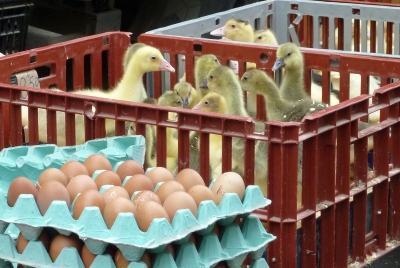 Falaise chicks in a basket


After a day with no driving, we drove west to Pont d'Ouilly and on to Clécy to visit the large model railway layout. The owner was keen to demonstrate it all to us, although we had to wait a while for a few more visitors to turn up.
Continuing south we spotted some gendarmes with a speed camera hiding behind a hedge as we left a small village, so turned up the speed limit warning sound on our satnav, as the limits vary so frequently around French towns. We stopped at Domfront for lunch and looked at the ruined château, nothing special and the town was rather run down, with lots of empty shops. However there was an interesting church built from reinforced concrete in the 1920's, a bit stark from the outside but an amazing interior with Byzantine style mosaics decorating the walls. From there we drove to Saint Fraimbault and an aire accessed by a €1 coin operated barrier. It turned out to be an award winning 4 star "Ville Fleurie" with attractive flower beds and a pleasant wooded lakeside walk. 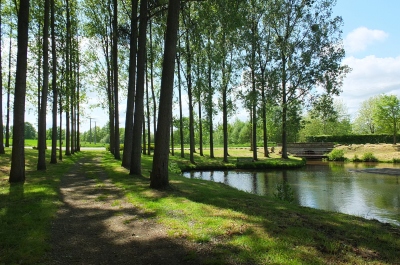 
We decided to bypass the large town of Laval and stopped for lunch at Château-Gontier, on the River Mayenne, with riverside parking (but no services), for motorhomes by the large exhibition complex. There were a few old buildings in the town centre, but we decided to miss a visit to the large cathedral on the hilltop, and headed down to the Loire and an overnight stop at the aire at Bouchemaine. Continuing south, we reached Vouvant in the Forêt de Mervant-Vouvant regional park. Another Plus Beau village and a "city of history and character", there were many attractive buildings, an historic tower and a large Norman church with an amazing carved doorway. A short distance away was Mervent where we found the aire and forest walks. The area was very quiet, although the tourist office was open, and probably livelier when the large boating and leisure complex is open in the summer. As is often the case, the lakeside wasn't very accessible on foot.

We decided to head for the coast, so drove across the flat Marias Poitevin region to bypass La Rochelle, and crossed the high toll bridge to the Île de Ré, where there were several aires listed. All the carparks had height barriers and overnight parking was banned, so we stopped first at the private aire at Le Bois Plage en Ré, adjacent to Les Amis de Plage campsite. 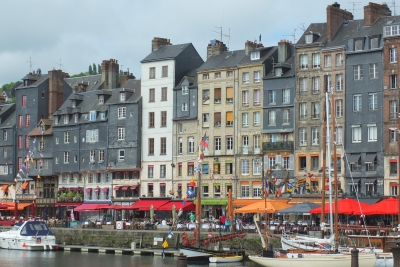 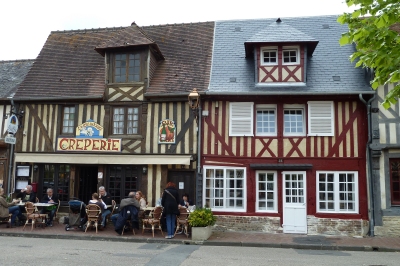 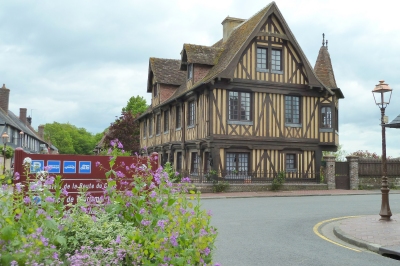 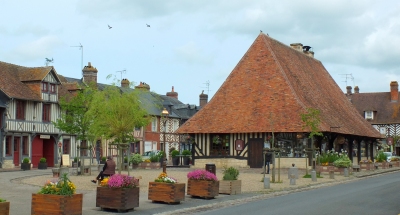 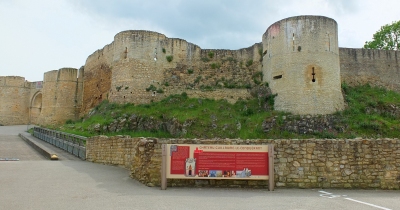 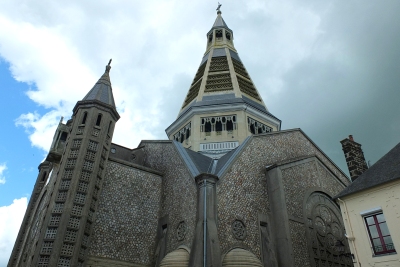 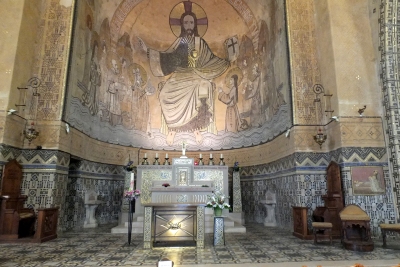 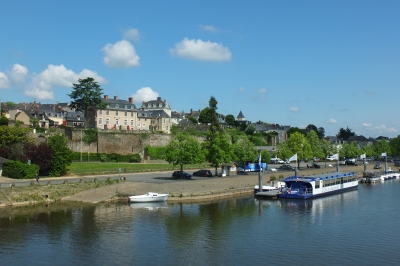 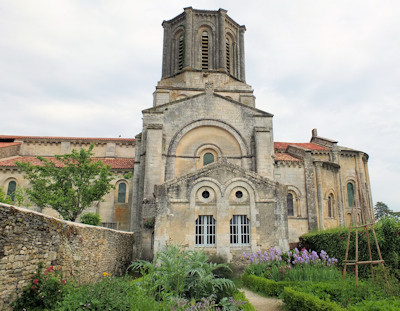 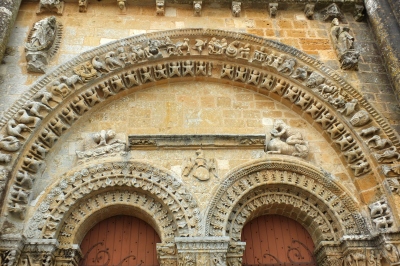 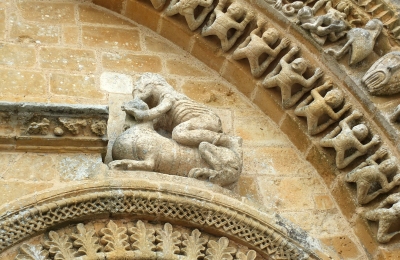 
It was a short walk over the dunes to the massive sandy beach, and there are plenty of well marked cycle paths all over the flat island. The next day we drove to Les Portes en Ré, at the far end of the island, then back to the municipal aire at St Clément des Baleines, near the popular lighthouse with gift shops and food kiosks. The villages on the island mostly consist of low single storey houses with a large church in the centre. The beaches at this end of the island aren't developed, and we came across several WW2 concrete bunkers covered with graffiti. The next day we drove to the main town of Saint Martin de Ré, which was far busier being a Sunday, with lots of tourist attractions and gift shops in the narrow streets around the harbour, but the tourist office was closed as it was low season!