Motorhome and Away
France 2016 - Coast to Pyrénées


Continuing down the coast, we took the main dual carriageway to Rochefort, then turned off across flat and marshy land to Brouage, an old fortified village, and on to the coast, famous for its extensive oyster farms. The shore line was not particularly attractive around Marennes, so we turned inland, overnighting with one other motorhome in the village square at St Agnant, before continuing to Saintes, but the traffic was very busy on the ring road, so we headed to Pons and Jonzac, passing the large newly built Antilles leisure complex and casino. Finding quieter roads, we spotted a free aire at the small village of Leoville, so parked up for the rest of the day by a pleasant park. There was a waymarked path up to a calvary and back along quiet lanes with orchids everywhere. The village was the typical mix of smart houses and scruffy buildings. The couple of shops in the centre were closed, so there was nowhere to get a jeton for the service borne. (We have learnt to always top up the fresh water and empty the waste tanks where the opportunity arises). 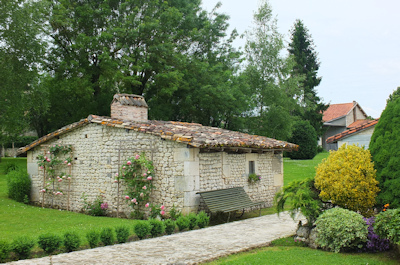 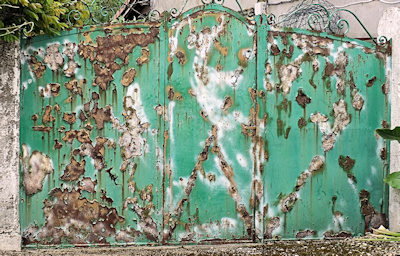 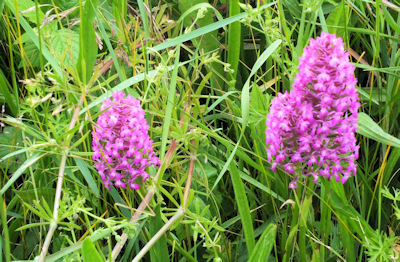 It was a wet day as we continued south-east towards the Dordogne, through several ordinary looking towns, then managed to get lost in the maze of lanes through the dense woods of the extensive Fôret de la Double, before reaching a busy main road with lots of lorries. Taking the Bergerac ring-road, we turned off to the large château at Monbazillac for a lunch stop. We then drove across farming country to the old bastide town of Villareal, where the free borne had the slowest push button water tap ever. Although the town looked interesting with its timbered buildings, the weather was still poor, so we drove on the aire below the massive dark chateau at Biron for a peaceful night.
The next day was sunnier so we drove to Monpazier, a popular tourist destination with its market in the large central square. After a stroll around the town, we again got lost along back lanes and ended up at Fumel. After more meandering along quiet roads to visit the tiny walled village of Frespech, we reached the aire at Roquecor, another attractive small village with many restored buildings. 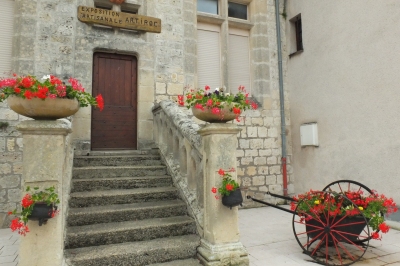 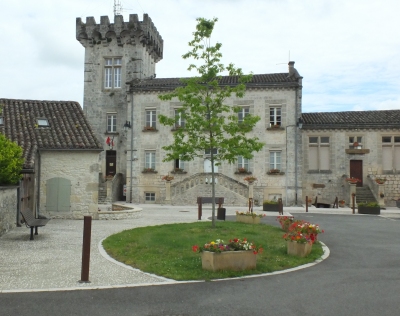 
We found from an Open Gardens leaflet that a large nursery of Latour-Marliac, famous for its water lilies, was having an open day so headed there, passing though the large town of Villeneuve-sur-Lot to Le Temple-sur-Lot, where we eventually found it. They had an impressive display, with many unusual colours, although not many were in full bloom, and had records of supplying Monet with lilies for his garden at Giverny. 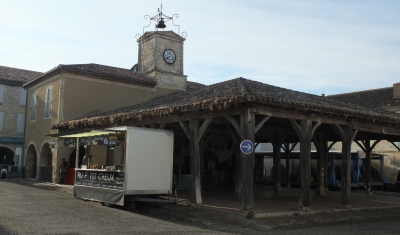 
We continued south bypassing the large town of Agen, and stopped at Lectoure for lunch before driving to Saint Clar, a small bastide town with two arcaded squares, one with a market hall, the other with a large church. There was a fete being set up with stalls and funfair, but the music and entertainment wasn't starting until 11pm! However we spent a peaceful night on the free aire at a former campsite on the edge of the town.

We continued south to Marciac, famous for its jazz festival every August, and pulled in to Camping du Lac, run by a welcoming British couple. It was now much warmer so we spent a lazy two days strolling around the nearby lake and attractive town.

With the Pyrénées in the distance we continued on busier roads around Tarbes, where we called in to the massive centre commercial for a major food shop. We then drove down to Lourdes and took the bypass on to Pierrefitte-Nestalas where we found a pleasant aire in the town centre, by a walking trail into the hills along a former railway track. 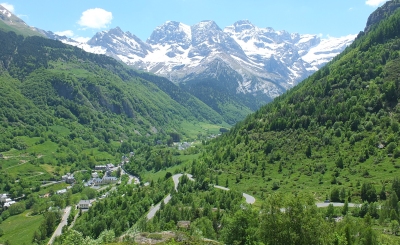 From there we took the main road to the superb Cirque de Gavarnie with its impressive waterfalls. Parking at the large aire 2km out of the town, we walked up to the Notre-Dame de Nieges statue on the nearby hill, with good views to the mountains. The next morning we parked in the village centre and took the track towards the cirque which wasn't too busy as we set off quite early in the morning, before the day trippers and coaches arrived at this much visited site. Luckily it was a beautiful sunny day for our hike. 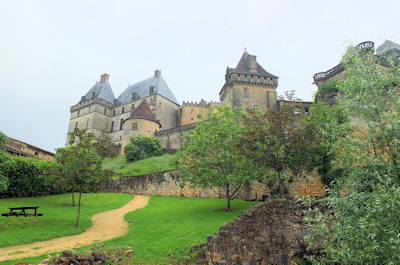 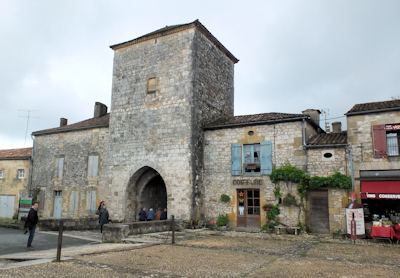 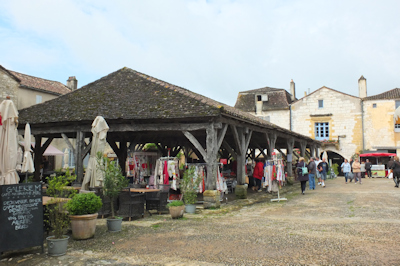 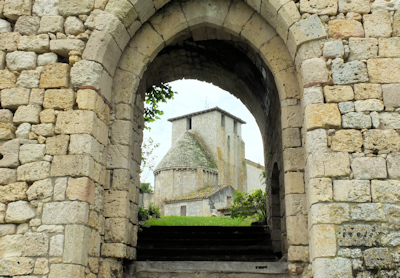 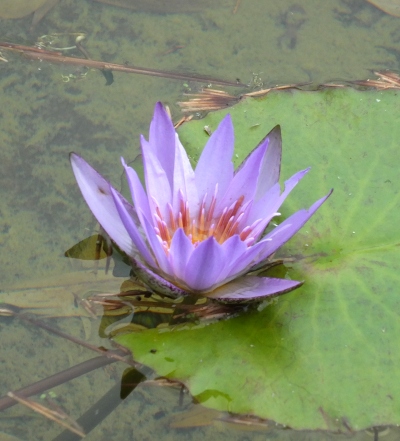 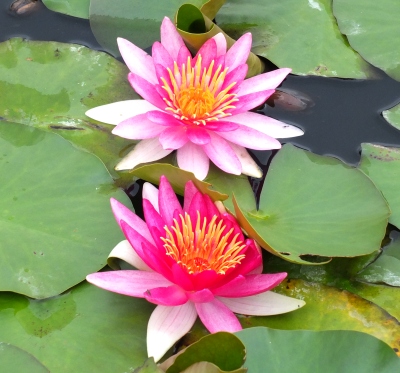 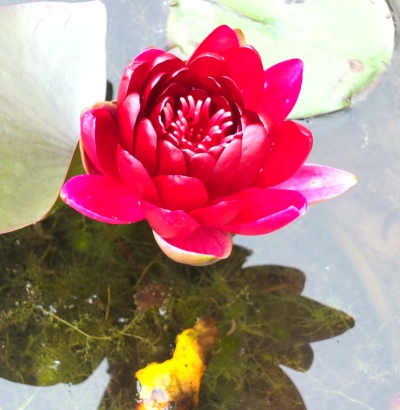 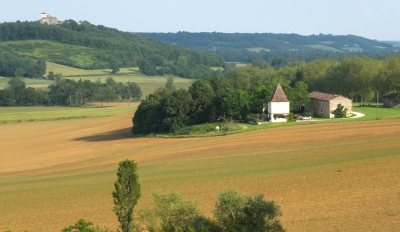 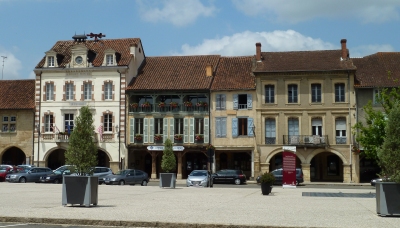 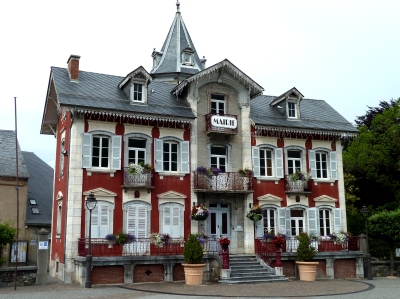 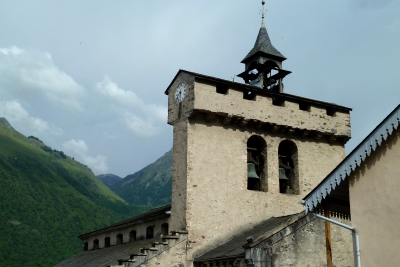 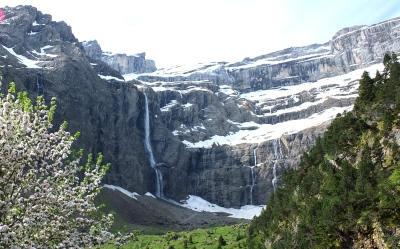 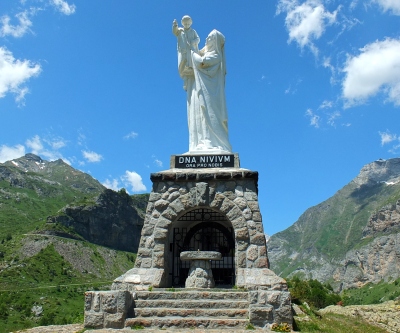 We decided to turn east along the foothills of the Pyrénées, avoiding the Col de Tourmalet, as the roads were crowded with cyclists, and stopped overnight at the small village of Campan, with interesting plane trees joined together over the street. It is known for its colourful puppets which are paraded through the streets on festival days. The next morning, we drove over the Col d'Aspin, which was unfortunately shrouded in low cloud until we descended into the next valley at Arreau, and a stop at the aire at Loudenvielle, by a large lake and Balnéa spa/leisure complex. Continuing our meander through the Pyrénées foothills, we headed north and ended up at Mazères sur Salat, near Saint Martory, once a centre for paper making, including the Rizla cigarette paper factory. The aire was by a weir on the fast flowing river so was rather noisy (but free!). They hold an annual Fête du Papier at the small paper museum in the town.