Motorhome and Away
France 2010 - Cap to Calais


After travelling on the main dual carriageway to avoid the large city of St Brieuc, we turned off towards Le Val-Andre on the coast, intrigued by signs to ice sculptures only to find it was only on at the weekend. After negotiating the busy market and roadworks in the town centre, we drove on through Erquy to Sables d'Or les Pins, a strange resort with wide streets and a large casino on the otherwise undeveloped and deserted seafront. Now the sea mist was rolling in, although there was bright sunshine a few hundred yards inland, as we drove towards Cap Fréhel. All we could hear was the foghorn so we continued around the bay to St Cast le Guildo, where there were several aires marked on an information board. We parked at the one at Pointe de Bay (no services) but still couldn't see the sea through the mist. After lunch we decided it wasn't going to brighten up so headed inland, ending up in the old town of Dinan. The aire beneath the viaduct was expensive for daytime parking so we drove across the bridge to find the one at Lanvallay, which was free, and walked back down a steep path to the viaduct and up to the old town with many half-timbered buildings. Tourist offices in France can be rather variable and Dinan's was mostly interested in booking events and hotels, but we managed to get a free map and wandered around the veille ville and down to the attractive quayside before returning to our van for a peaceful evening. 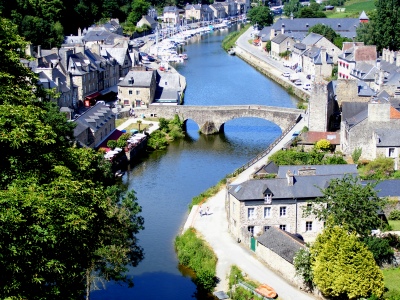 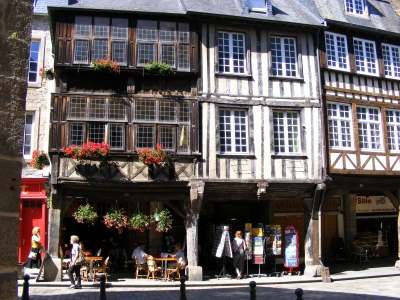 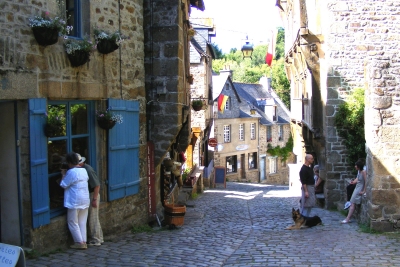 lane in Dinan
We set off next morning towards St Malo, diverting off the main road to the small attractive village of Saint Suliac, on the Rance estuary but above the barrage so more like a large lake. After a stroll around and picking up some useful tourist information in their small tourist bureau in the mairie, we re-joined the now very busy main road (being a Saturday), and drove around the edge of St Malo to reach the coast at Rothéneuf, where there were some old sculptures carved on the rocks. Having paid €2.50 each to enter, we just about managed to negotiate the very uneven and rather hazardous paths trying to work out the weather worn shapes of faces, birds and animals. 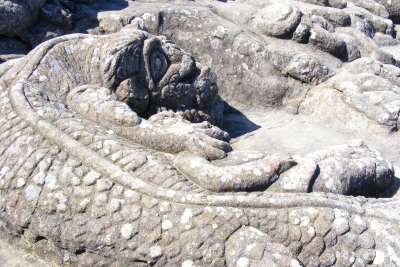 We continued along the coast to another headland, where we parked by the roadside with several other motorhomes, and walked to the Pointe du Grouin with lovely views over the sea with the Îles Chausey on the horizon. After a pleasant sunny afternoon, we drove to Cancale passing many sheds on the seashore selling oysters, and pulled in to the small aire at St Benoît-des-Ondes for the night. 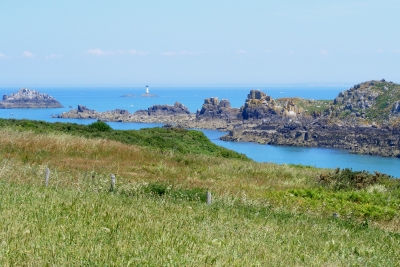 The next morning we spotted lots of cars parked on the beach as we reached Hirel, so we parked up to visit a vide grenier (car boot sale), but it was mostly the same overpriced tat as we find at home. At Le Vivier-s-Mer we turned inland to visit Mont Dol, and walked up to the hilltop windmill and monument with good views across to Le Mont-St-Michel. After stopping at a Super U for fuel, (closed but luckily our Nationwide debit card worked ok at the automatic pump - must remember to fill up before Sundays!), we continued inland, heading for a nature park marked on the map but we couldn't find it so continued along country lanes through various plain rural villages, passing a pond with model boat enthusiasts, before reaching Pontorson and the busy road to Le Mont-St-Michel, with lots of tourist attractions and coaches, to park for the night with many other motorhomes on the tidal flats (now closed) - luckily high tides weren't forecast. 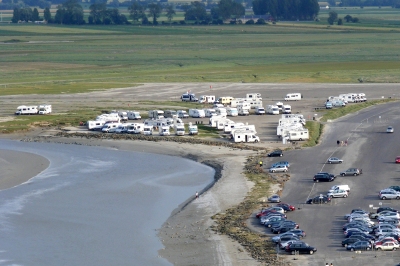 motorhome parking at Mont-St-Michel
Le Mont-St-Michel is probably one of the most visited places in France, but by the evening most of the tourists had left, so we walked up the narrow streets to the abey, returning to the van as the floodlighting was turned on when we thought it looks most impressive.

After a dry night, it was time for a longer drive east across Normandy, so we stayed on main roads calling in at Villedieu-les-Poêles which only has a couple of copperware showrooms left - I seem to remember the main road was lined with gift shops back in the 1970's - and headed across rolling farmland to Condé-s- Noireau, and a diversion to the Roche d'Oêtre, overlooking a wooded gorge in the Normandie Suisse region, now with a large new visitor centre, but still unfenced rock edges. From there we continued to Vimoutier and another free aire for the night near the creamery, where Le President Camembert cheese is made (24 hours a day unfortunately). There were several dairy themed statues in the town.

We took the main road north to Lisieux, and a minor road to the west of the river to Pont-l'Eveque, and followed the signs to  Honfleur, another popular tourist destination where we found a space in the (daytime only) motorhome parking area next to the busy aire on the harbour. We joined the crowds walking around the old port, and then found some quieter back streets with many very old timbered houses. After lunch, we drove along to the Pont de Tancarville toll bridge, crossing the Seine further upriver than the much higher and newer Pont de Normandie, and up to the coast at Fécamp, where the aire next to the warehouses on the harbour didn't look too inviting, so we continued along the coast to the small resort of St-Pierre-en-Port, where we found a campsite on the clifftop above the white chalk cliffs. The next morning we continued east along the coast road, passing several aires in the small seaside towns. The one at St Valery-en-Caux is very popular but we didn't like the very narrow unguarded access road along the harbour wall below the cliffs, and it was full anyway with vans packed in very close together - sometimes we would rather pay more for some green space on a campsite.

We stopped for lunch on the almost deserted promenade at Dieppe. In previous years like most Brits we had driven straight away from the town when arriving by ferry, but it reminded us of Southsea with its large green on the sea front and lively shopping area, and is probably a lot more attractive on a warm summer's day. You could still get the Plat du Jour for €7.20 in some harbourside cafés! Heading inland we cut across country to the valley of the Somme and through a string of  villages and commuter towns to Amiens.

St Suliac on the River Rance 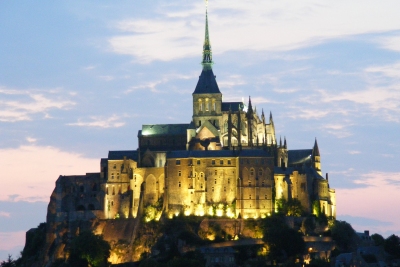 Le Mont-St-Michel in the evening 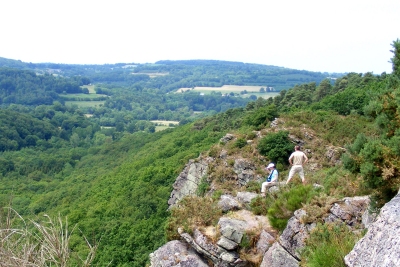 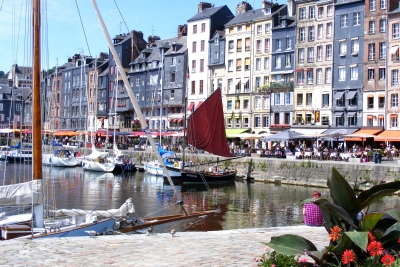 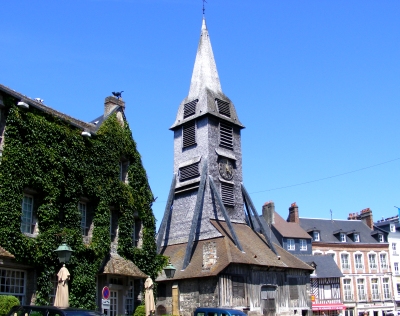 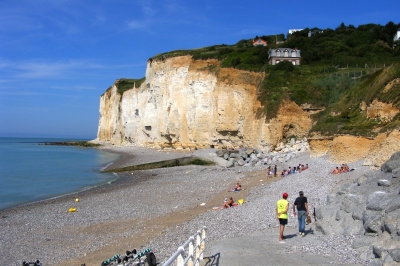 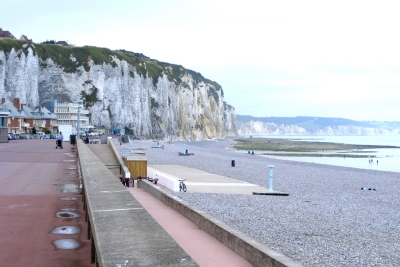 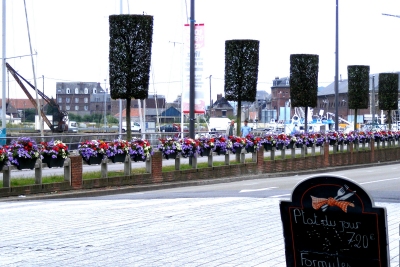 We drove into the city centre intending to stop at a listed aire, intending to visit the cathedral which is lit up in the evenings. Unfortunately it was the afternoon rush hour when we arrived, so after a couple of frightening circuits negotiating the city centre traffic and unable to find the aire (now closed anyway), we gave up and headed for the Le Parc de Cignes campsite on the outskirts. There is an aire at the entrance but it's no cheaper than using the site with the ACSI discount. The city illuminations are probably wonderful but we had seen the fantastic ones at Chartres last year, so weren't too dissapointed, and we chatted to some British motorhomers in the evening. The last full day we headed back to the coast via Abbeville to Le Crotoy and, after a drive around narrow coastal lanes, we reached Montreuil, an old walled town which was a port before the river silted up. It has a Vauban fort and many old buildings and it is famous as the setting for Victor Hugo's "Les Miserables". From there we drove up to join the free autoroute bypassing Boulogne, and back to the coast road, pulling in to one of our favourite aires at the Site des 2 Caps near Tardinghen for a peaceful night in pleasant countryside overlooking Le Manche, before the short drive to Calais and the morning ferry back to England.