Motorhome and Away
France 2010 - Coast and Closes


Locronan is a medieval town with a cobbled square surrounded by the large church and many old grey stone buildings. It has been used as a set for several films. Just off the main street with many gift shops there is a narrow path that leads through woods to an old well and the Notre Dame de Bonne Nouvelle chapel with modern colourful stained glass windows. After a peaceful night - only us, one tent and a couple of cabin residents on the campsite - we drove on empty roads to Menez Hom, a distinct rounded hill 330m high with Neolithic remains and several monuments, for a superb view over the Finistère coast and headlands. Whilst there a German hotelbus arrived, we weren't sure if it would fit on a campsite pitch! We then headed west on the main road to Crozon, a busy built-up area, for diesel and down to the popular sailing resort of Morgat with a sandy bay but everything was still closed up (in mid June). From there we continued a short distance to Camaret-sur-Mer where we found the excellent newly opened aire by the cliffs next to Megalithic standing stone alignments on the edge of the town. In the afternoon we walked over the headland and down to the harbour where the rusting hulks of old trawlers were beached referred to in the guidebooks as a boat graveyard. There was also a pretty seafarers chapel and a distinctive Vauban fort bult of pink sandstone. Exploring the back streets we came across several artists' galleries and craft shops. 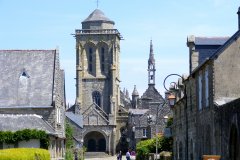 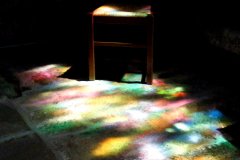 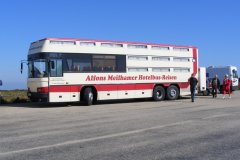 German hotelbus
The aire filled up by the evening so most of the 75 marked bays were in use. The following day we decided to head inland diverting to Argol to look at the parish close and a quirky artist's workshop and garden full of strange sculptures before driving on back roads through la Forêt du Cranou to Brasparts and across moorlands to the Montagne St Michel (380m) where a side road climbed up to a chapel. It was an eerie place which we felt we had visited before and to add to the atmosphere there was mystical chanting coming from the chapel. We didn't dare open the door to investigate - but there was a hippy van parked in the car park! Once back on the road we drove across charred moorland recovering from a large fire, to Roc Trévezel, the second highest place in Brttany, and reached St Thégonnec to look at the old parish close with an impressive calvary of statues and carvings. There was also a town fête with craft stalls and performers including some Breton singing and dancing - not to our taste so we didn't linger. The next town of Guimiliau has the largest close and calvary and ornately decorated church interior. 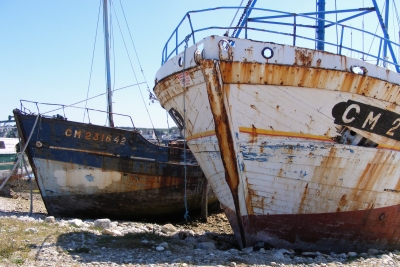 
The final parish close we visited was at nearby Lampaul-Guimiliau where we stopped overnight on the pleasant free aire in the park where we met another British motorhomer. 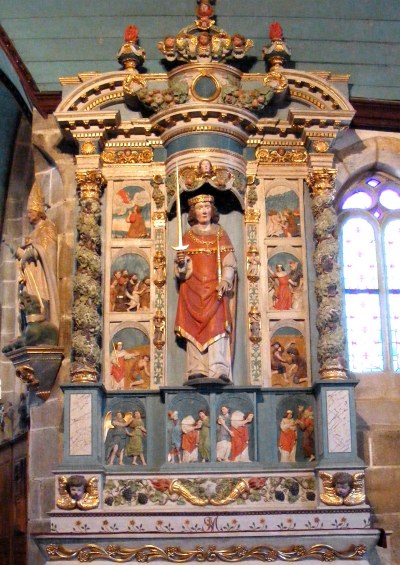 Guimiliau altar
The next day Sunday we headed north to the coast driving through busy St Pol-de-Léon and on to the colourful Jardin Exotique on the cliffs above Roscoff. pleasant to walk around but spoilt by the constant noise of a dredger working in the ferry port where they are extending the harbour. We found a suitable parking place for lunch at the aire by the bay at Laber to the west of the town.  We had intended to visit Roscoff town centre but gave up after walking through housing estates for half an hour so returned to the van and drove to St Pol following the signposted camping-car route to the aire at Pempoul overlooking the sea by the Rocher Ste Anne where we enjoyed a walk along the causeway to the rock in the sunshine.  The good weather continued as we headed east meandering along the coast after negotiating very busy Morlaix looking for a supermarket to get LPG due to a satnav operator error on the bypass. After passing through the small resort of Primel Tragastel we arrived at  the small town of Plougasnou and drove up to a layby on the headland overlooking the Plage de St Jean du Doigt, returning to Plougasnou to find the service borne and then parked by the sea wall for the night. 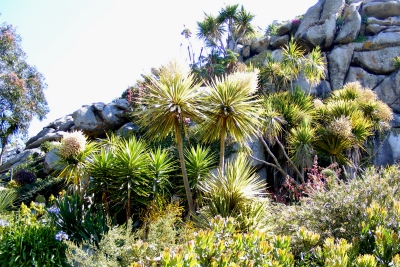 Jardin Exotique at Roscoff
We quickly drove through busy Locquirec and passed the large bay of St Michel-en-Grève where mechanical diggers were removing vast amounts of green seaweed. After stopping at Lannion for shopping and cash from an in-store ATM which automatically converted the amount to GB pounds at an awful exchange rate (not to be repeated), we reached the Côte de Granit Rose and found a parking place without a height barrier by the aquarium in Trégastel Plage from where there is a pleasant walk around the Île Renote nature reserve. A couple of aires we drove past looked crowded so we returned along the coast to the Île Grande where there was a small private aire de parking by the municipal campsite. The next morning we drove to Ploumanach where we walked along the Sentier des Douaniers passing the massive pink boulders many of which I'm sure used to have names of animals carved on them. We returned via the sculpture park which has been extended with some strange pieces since we visited it years ago. We then drove inland to Tréguier but arrived as the market was packing up so there was litter everywhere and we didn't like the aire in the town - too shady and closed in with signs about thieves. However we continued up to the coast and found a delightful official overnight parking place for four camping-cars (but no services) at the tiny Port-Béni near Pleubian, overlooking the sea, where we were joined by about six others and a German car and caravan - aren't rules there to be broken? 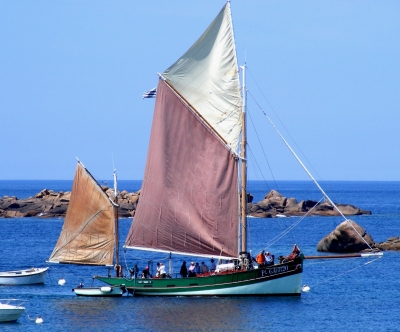 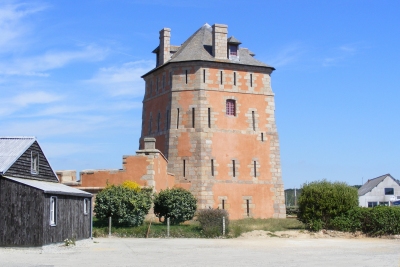 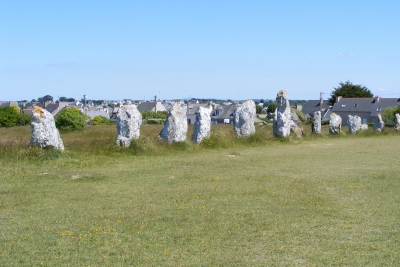 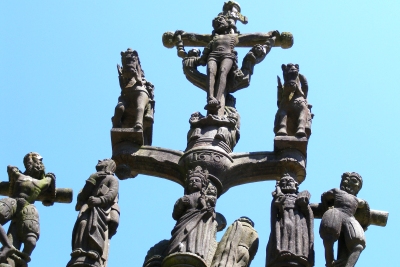 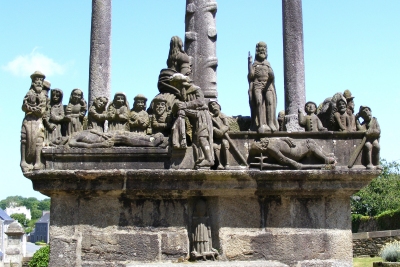 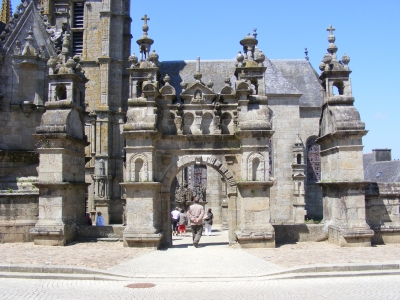 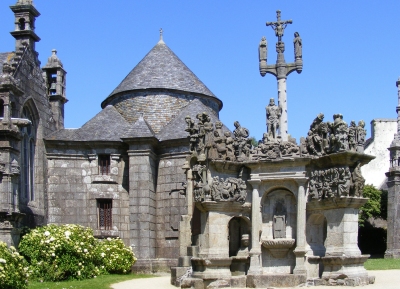 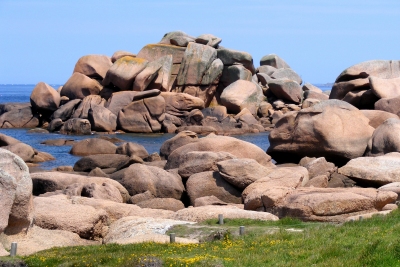 near Trégastel Plage on the Rose Granite coast 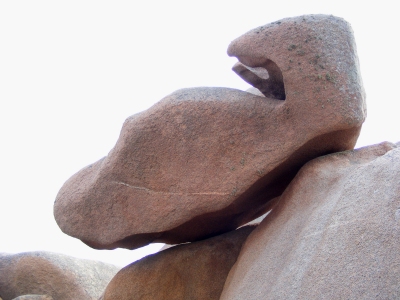 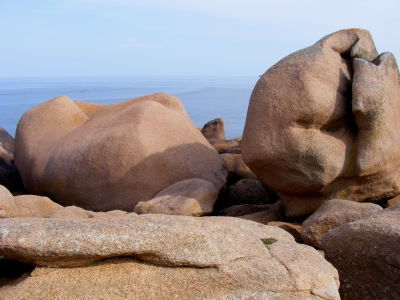 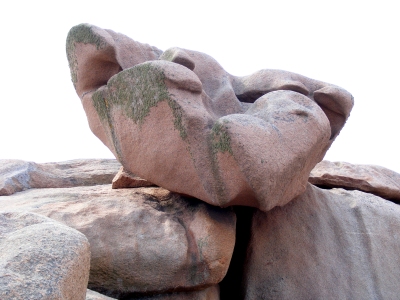 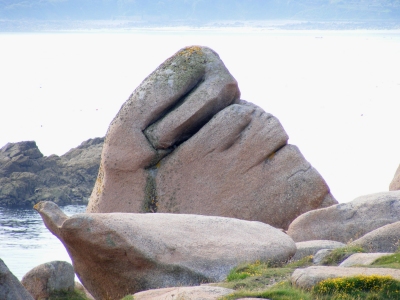 After driving to the Sillon de Talbert, a miniature version of Spurn Head in Yorkshire but not really worth a detour, we headed south east to the busy harbour of Paimpol where we didn't find anywhere to park, so continued down the main road with a diversion down a narrow lane to Le Palus-Plage where there were too many motorhomes parked next to bars and cafés so we decided to head for a campsite and pulled in to Camping Le Panoramic, a short walk to the sandy beach and harbour of the pleasant resort of Binic. After catching up with the chores we walked into the town and enjoyed superb icecreams from a parlour on the seafront. In the evening we used the campsite's free wifi to catchup with our mail and some web browsing before planning the final days of our trip.