Motorhome and Away
France 2016 - To Giverny and the Coast

Home > European Touring > Europe 2016> To Giverny and the Coast


To Giverny and the Coast


Now on the final week of our trip, we headed north through the Brenne Regional Park, an area of marshland and hundreds of man made lakes, calling in at the excellent Maison de la Nature, (where motorhomes may park for one night). There are several parking places with bird hides, around the maze of lanes. The small aire at Tournon St Martin was full, but we spotted a small motorhome sign as we approached Angles-sur-Anglin, another pretty Plus Beau village with a ruined chateau on a rock above the river, and parked behind the Salle des Fêtes. We took an evening walk around the village where there was a poster for a "British" market, and a hand painted warning sign on a high unfenced rock to "watch your children and don't throw stones". 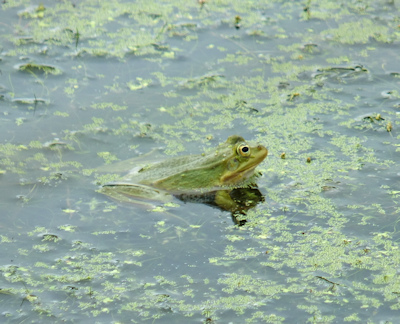 A green frog in the Brenne 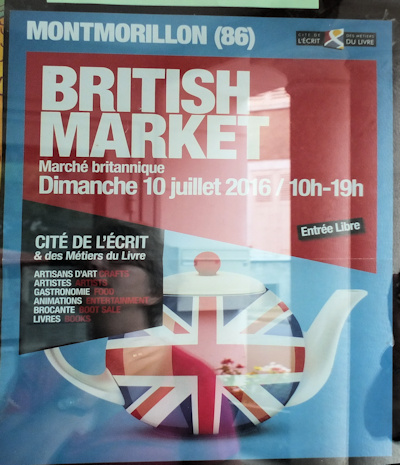 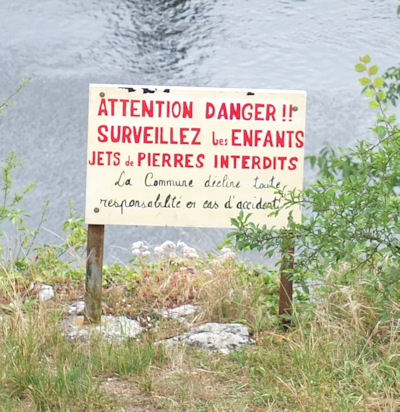 From there we drove up to the small spa town of La Roche-Posay, then up to Loches where, being a Saturday, the large street market was in full swing. We managed to squeeze into one of the small motorhome aires by the station (with cars parked in it of course!), and wandered around the stalls to catch the aromas of fromage and saucissons. From there it was a short drive to the attractive town of Montrésor, with a large church and chateau beside the river, where we strolled in the evening to look and listen to the Nuits Solaires event with coloured lights and ambient music. 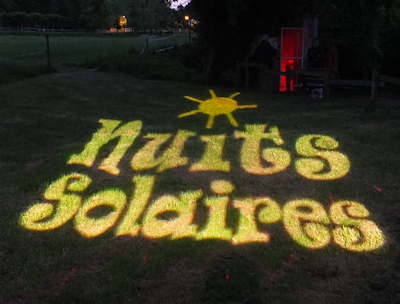 
The next morning we drove to Chédigny where the streets were full of roses, although they were mostly past their best in early July, then headed for the Loire, passing the busy chateau at Cheverny, to reach the tiny village of St Dyé sur Loire with a free motorhome parking area on the riverside. It was possible to take a trip from here at weekends in a traditional flat bottomed barge. 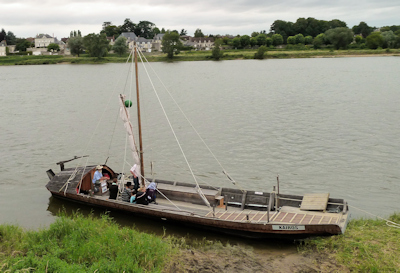 
Now we had to make more progress to the channel port, so crossed the Loire at Beaugency and drove through flat fields to Chateaudun, parking below the massive chateau. We walked up to the town centre but they were clearing up after a major weekend medieval fair, so not at its best. We continued to Bonneval which calls itself Le Petite Venise de Beauce, and found the free aire by the small canal that circles the town centre, with electric boats for hire. The abbey which is now a hospital has an impressive gatehouse.


We now headed towards Monet's garden at Giverny, which we had visited a few years ago in late April, when it was a riot of colourful tulips and other spring flowers. We reached Vernon on the River Seine late in the afternoon so decided to stay at the small campsite at St Marcel and visit Giverny the next day. Taking an evening stroll past the mairie, we were impressed by French bureaucracy as there were five boards full of official notices. The next morning we did our final shop in a French supermarket, topping up our cheese and wine supplies, then drove along to Giverny, but as it was busy, continued to the small village of La Roche Guyon for lunch and a walk along the river bank, up to the chateau, and around the massive walled garden. Returning to Giverny, we were directed to the motorhome parking area where there were about a dozen vans parked, and joined the queue to visit the garden which was as crowded as ever. The gardens by the house were most impressive, with masses of colour produced by the dense planting, and we managed to get a few photos without too many people in them, especially now in the age of selfie sticks. A couple were trying to get everyone to keep off one of the famous green bridges by the lily ponds for their photos - no chance! 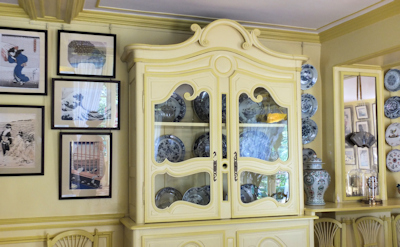 
We shuffled with the crowds around the interior of the house, with reproductions of his paintings, and many Japanese woodblock prints which he collected over the forty-three years he lived there. Leaving via the colourful yellow and blue kitchen and after a visit to the shop, we returned to the motorhome and discovered that it was now possible to stay in the large grassy parking area overnight (free but with no services).
The gardens are open from late March to November 1st. 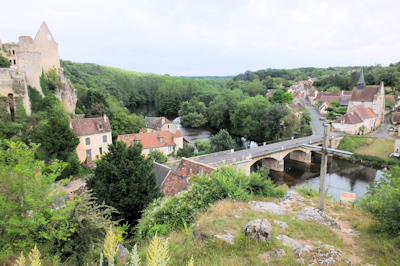 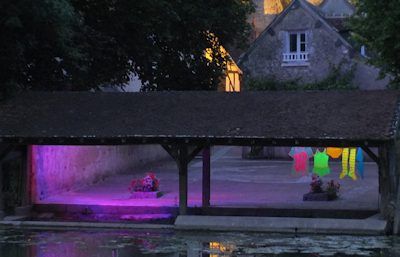 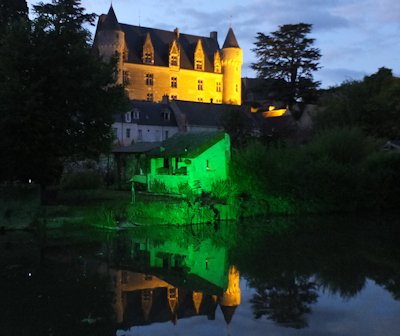 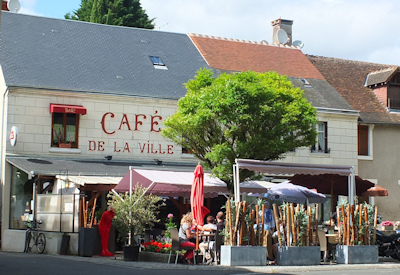 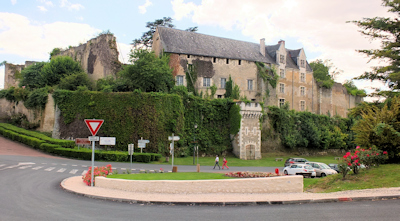 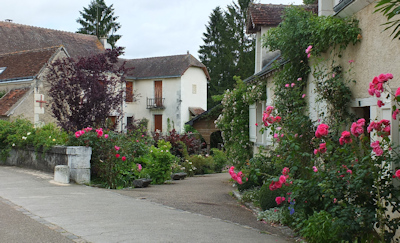 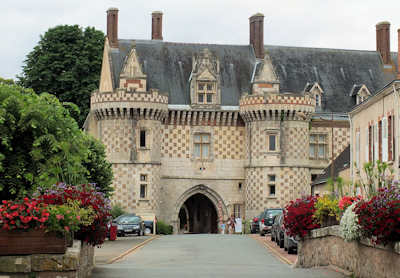 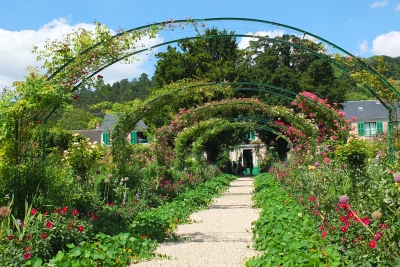 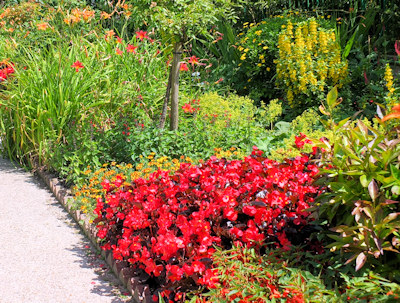 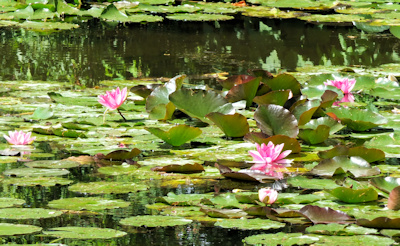 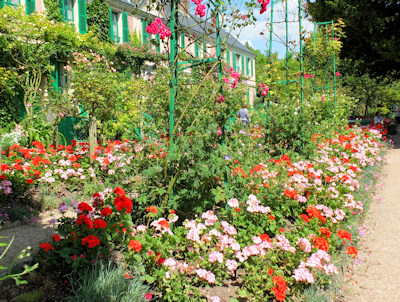 For our final full day in France we meandered north to the typical Normandy village of Lyons la Forêt, with its timber framed buildings and flower decked market hall. We then headed for Forges les Eaux, where there is a large popular aire for our last night. We chatted to several British motorhomers - the most we had met during our two month trip, and walked through the town to the large casino and park, with a statue representing the three water sources of the spa.
It was a short drive the next morning to reach Dieppe in time for the midday ferry to Newhaven.

<< Millau to the Creuse