Motorhome and Away
Northern Germany Tour 2012


Another year another trip into Europe whilst we are fit and able to enjoy, and afford, travelling! We decided to head for the North German west and east coasts via Keukenhof gardens, in the Netherlands, at their best in late April.We planned a few days in Southern Denmark and a short detour into Poland. Our return route would take us to Dresden, then across central Germany to Venlo, back in the Netherlands, to visit the Floriade garden festival, held once every ten years.

Our route through Northern Germany 2012

Rather than enduring the awful drive down to Dover, we took the overnight P&O ferry from Hull to Rotterdam which was far more convenient, if somewhat more expensive. Booking through the Camping & Caravanning Club Carefree service gave us a small discount and included a free ACSI discount camping card. We upgraded to an outside cabin for the return journey as we didn't like the inside cabin, not that there was much to look at across the North Sea.

After negotiating the Rotterdam ring road, we headed via Delft, to a pre-booked campsite at Noordwijk on the Dutch coast, to see the spectacular annual flower parade, before visiting the colourful Keukenhof Gardens which were rather crowded but still enjoyable.

Our route then took us across the 30km Afsluitdijk separating Ijsselmeer from the Noordzee, and through the flat landscape of Friesland to enter Germany near Papenburg, where massive cruise ships are built 35km inland! We then meandered east to Lüneburg Heath, then to the pretty Altes Land, south of the Elbe near Hamburg, where the orchards were just in bloom. Turning north, we reached the Wattenmeer coast visiting Büsum, St Peter-Ording and Husum, and into Denmark, diverting to the interesting island of Rømø, (highest point 19 metres), and then on to Ribe, Denmark's oldest town. We crossed the peninsular to Kolding and the Design Museum, and then turned south once more, stopping at Christiansfeld, a Moravian town, before re-entering Germany at Flensburg and along the Ostsee (Baltic) coast. After an interesting night parked at a new stellplatz near Rendsburg near Keil, almost touching the ships on the Nord-Ostsee Kanal, we drove via the flat Holsteinische Schweiz lakeland area to Lübeck, another old city and its resort of Travemünde. Continuing along the coast to the old Hanseatic city of Wismar, we enjoyed sunny weather as we took the ferry at Warnemünde, near Rostock where passengers were embarking on huge cruise ships, and detoured along the Darß peninsula before crossing the new bridge to the isle of Rügen. We spent a few days visiting Saßnitz, fascinating Prora (Hitler's 5 km long "holiday" camp), and Sellin. We then decided to head inland to Müritz, Germany's largest natural lake which was extremely busy, but we found a small stellplatz a few kilometres away from the main town of Waren. After a morning in the pretty lakeside town of Röbel, it was an easy drive via Schloss Rheinsberg and Neuruppin to Potsdam and the amazing Sanssouci Park and Palaces. 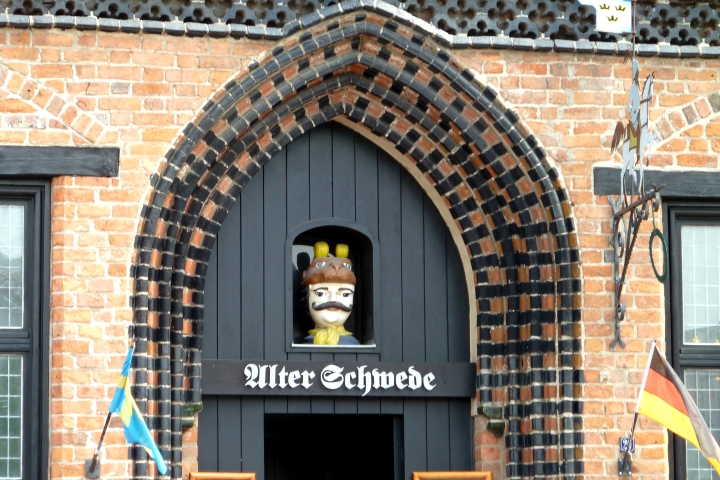 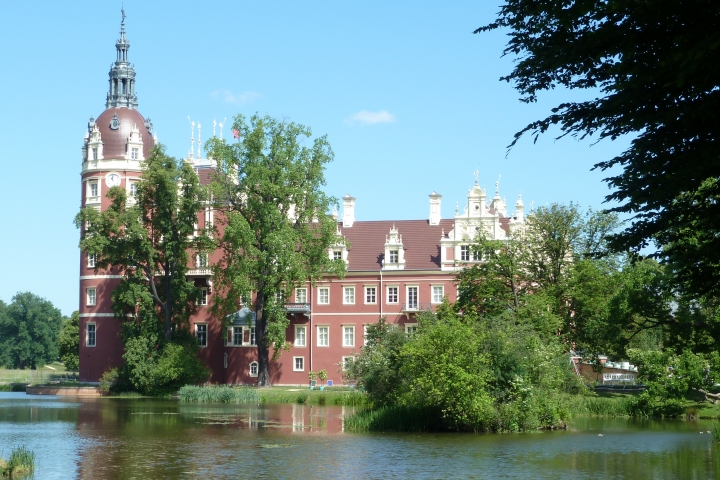 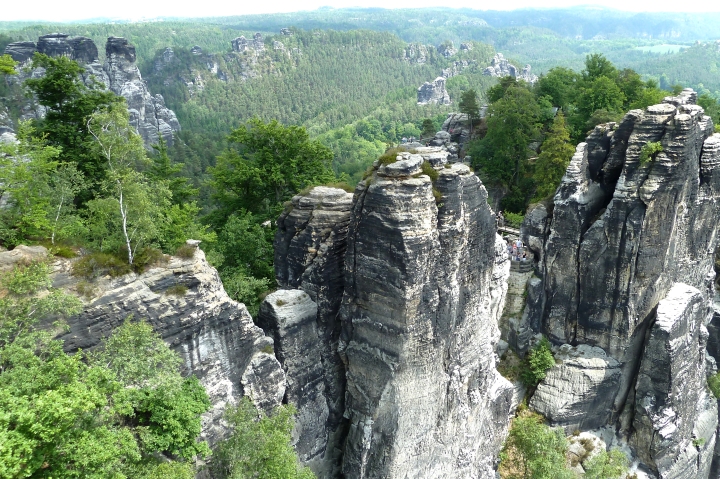 We decided to miss out Berlin so continued south east to Lübben, in the Spreewald, another lake district where the Sorb people still live. It's also home of the gherkin, evident in the many giftshops. A local tourist leaflet led us to detour to a new visitor centre for the massive open cast Lignite (brown coal) mines at Welzow, before we reached Bad Muskau on the Polish border, where there was a German/Polish festival in the Unesco listed Fürst-Pückler Park, which straddles the border here, so we spent just a couple of hours in Poland. We also came across another local event, with an Oldtimers vehicles display, at nearby Kromlau, famous for its rhododendron and azealea park.

From there we headed, via Bautzen, to the Bastei Rocks, another busy attraction overlooking the Elbe in the Saxon Switzerland National Park, and the first real hills we came across after five weeks of touring! After a river trip on a paddle steamer, we headed for Dresden and found a space at the stellplatz right in the centre of the city. We spent a day sightseeing in the rebuilt city then headed southwest through the wooded Erzgebirge region, ending up at the small spa town of Bad Brambach on the Czech border. The next morning we drove through the Czech Republic for about twenty minutes and got caught in a police check along with many German drivers just near the tacky market stalls at the border. Luckily we were waved on once our paperwork had been inspected, and returned to the German autobahn for a few miles, stopping at Hof, and on to Kronach. Passing through the wooded uplands of the Thüringerwald, we reached the attractive old town of Arnstadt, then continued northwest to Fritzlar with its many timber framed buildings, Edersee (one of the Dambusters dams), and the pleasant spa town of Bad Wildungen.

Passing through more wooded and hilly countryside and the interesting town of Freudenberg, near Siegen, we reached the Rhine just south of Bonn at the pretty riverside village of Unkel. We were treated to an unexpected late night firework display, followed by a peaceful night at the free stellplatz. We continued around the Bonn bypass and on to Brühl to look at the Unesco World Heritage listed Augustusburg Palace. After reaching the Dutch border and a detour to the whitewashed village of Thorn, near Roermond, we took the motorway to Venlo for the Floriade staying at an ACSI campsite fairly near. After a wet day at the festival, we had a tedious drive west, mostly on motorways which became busier as we neared Rotterdam, to board the overnight ferry to Hull and an easy morning drive home.